“No more long-term unemployment in local communities”: employment as a right

No one is unemployable, there are many useful activities and money is not lacking.

These are the three premises on which the “no more long term unemployment in local communities” (TZCLD) experimentation is based. Initiated by Patrick Valentin, vice-president of the TZCLD association, and ATD Quart Monde, with the support of Emmaüs France, the Secours catholique, the Pact Civique and the Fédération des acteurs de la solidarité, this experimentation is aimed at reducing long-term unemployment by offering to all people permanently deprived of employment who volunteer an open-ended employment contract paid at the minimum wage and with suited working hours.

These new jobs are useful unfilled activities that have been identified in the local communities. They are therefore not competing with market jobs in any way.

These jobs are partly financed by the reallocation of expenses linked to the employment deprivation, which costs the local authority 43 billion euros each year1. This estimate was produced by ATD Quart Monde in 2015 and takes into account social expenses such as Active Solidarity Income (RSA in French), expenses related to employment (ASS in French, support, etc.), shortfalls in taxes, and contributions and costs caused by unemployment (housing, health, etc.).

The other portion is financed with the turnover generated by structures for employment purposes (EBE in French), created in the context of the “no more long term unemployment in local communities” project. These are companies falling into the social and solidarity economy which have signed agreements to create additional jobs in their local communities.

The Territorial experimentation aimed at reducing long-term unemployment Act of 29 February 20162, unanimously adopted by the French Assembly and Senate, provides the implementation of this project for 10 local communities for 5 years. Since the start of the experimentation in early 2017, nearly 840 people have been hired in the 11 EBEs currently existing. The people permanently deprived of employment living in these local communities are involved and mobilised from the launch of the project (in the search for activities, the preliminary design of the EBE, etc.).

The Experimentation Fund, which oversees the project in authorised local communities, is seeing the return to employment of some long-term unemployed even before they are hired by the EBE. The activities developed in the regions are grouped into 3 main categories: local economic development, social cohesion and ecological transition (the latter representing 40% of them)3. 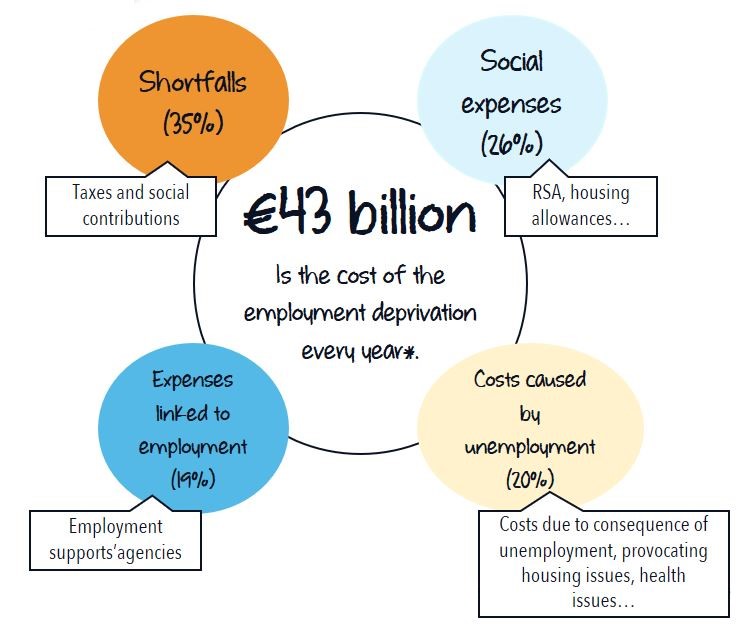 In order to test the effectiveness of the experimentation in the authorised local communities and provide scaling and diversity – and therefore greater credibility – to the project, it is necessary to prolong it the 10 pilot regions and even extend it to others.

The TZCLD association, the Experimentation Fund and the regions are therefore working to enact a second Law enabling the second stage of the experiment to go ahead. Today, nearly 200 emerging regions are preparing to integrate this initiative and make employment a right.