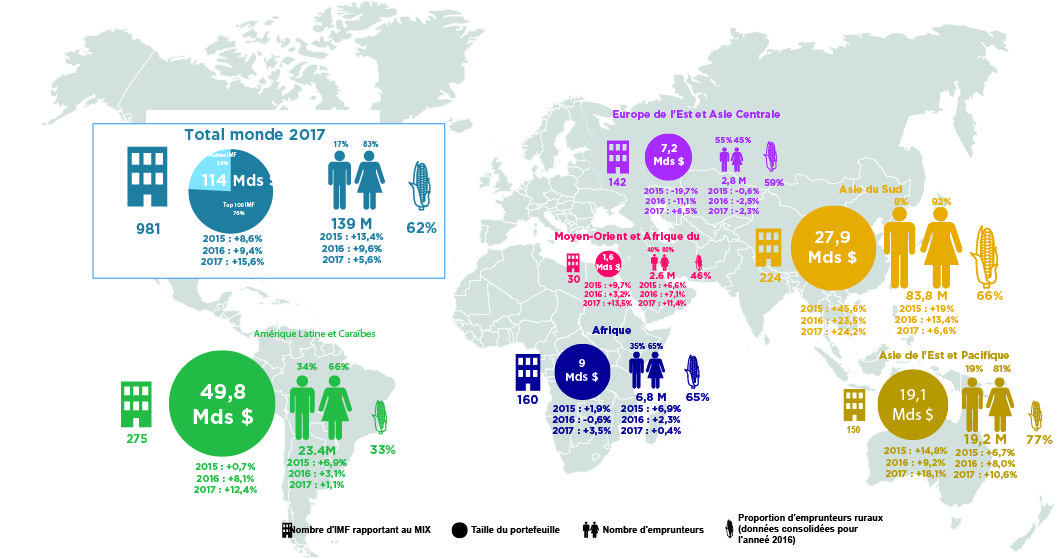 At the end of 2017, MFIs reached an estimated 139 million low-income and underserved clients with loans totaling an estimated 114 billion dollars. These levels represented a growth of 5.6% in total borrowers and 15.6% in loan portfolio. While the loan portfolio growth was stronger than the 2016 results (plus 6.2 points), expansion in outreach to new borrowers slowed by half in 2017 compared to the 9.6% growth experienced in 2016, representing a rising average loan balance per borrower.

Despite this slowdown in outreach to new clients, some MFIs are already positioning themselves to take advantage of an increasing digital user base with mobile money. A 2017 MIX survey of MFIs showed that 61% were deploying alternative delivery channels to reach clients, ranging from agents and ATMs to mobile phones. Of that total, 40% had already developed mobile money channels and a further 20% were in pilot testing. Additionally, according to GSMA’s 2017 State of the Industry Report on Mobile Money, mobile money access and usage grew at double digit rates.
Focus on regions
South Asia continues to lead global outreach, accounting for nearly two-thirds of global borrowers (60%). That being said, the region’s growth in borrowers has slowed for a second year, going from 13.4% in 2016 to 6.6% in 2017. This result is overshadowed by significantly slower growth in the region’s largest market, India, as fallout from the November 2016 demonetis ation decree. Demonetisation withdrew over 80% of the value of currency in circulation and unsettled MFIs’ cash-based disbursement and reimbursement businesses. As a result, borrower growth slowed from nearly 20% in the prior year to 5.8% in 2017.

Despite a slowdown in Cambodia, one of its lead markets, East Asia and the Pacific led regional growth in 2017 with 10.6% growth in borrowers and 18.1% in loan portfolio. Indonesia, the Philippines, and Myanmar all experienced an increase in borrowers greater than 15%. In Cambodia, on the other hand, the cooling effects of an interest rate cap from March 2017 led to an estimated 5% decline in borrowers by the end 2017.

Countries in Eastern Europe and Central Asia faced another challenging year in 2017. After a year of contraction in 2016, the loan portfolio grew in 2017 at 6.5%, an increase from the -11.1% of the previous year, but the borrower base contracted by 2.3%. The stricter regulatory norms applied in 2016 in Azerbaijan and Tajikistan that resulted in some MFIs’ licenses being revoked continued to dampen outreach in 2017. While Tajikistan experienced small growth in borrowers (+2.8%), the Azerbaijan borrower base shrank by over a quarter in 2017, and the loan portfolio by 15%.

In Africa, overall outreach to borrowers remained largely flat between 2016 and 2017, growing by 0.4%, with a similar trend in the loan portfolio outstanding (+3.5%). Several countries in West Africa, such as Benin, Senegal and Mali, experienced single-digit growth in borrowers. In East Africa, Kenyan MFIs faced a challenging environment for lending in 2017, with prolonged elections contributing to uncertainty and an interest rate cap announcement that put a brake on lending; the combination resulted in a contraction of the borrower base by over 18% during 2017.

Finally, growth in Latin American and the Caribbean, the largest regional portfolio by portfolio value (44%), slowed considerably in 2017, registering just 1.1% aggregate growth in borrowers (compared to +8.1% in 2016). Two of the largest markets, Mexico and Peru, experienced opposite trends: the total borrower outreach in Mexico shrank by 3.8% and Peruvian MFIs increased their client base by 9.5%.

Focus on clients
The results of the World Bank’s Global Findex for 2017 highlights how the MFIs reporting through MIX Market help increase access to financial services for excluded groups, including women. According to the Global Findex data, global account access increased from 62% in 2014 to 69% in 2017, yet the gap between account access for men and women remained unchanged at 7%. This gap in access is mirrored in MIX Market data, where regional differences also appear.

South Asian MFIs remain squarely focused on serving women, as many have done since inception, with 92% female borrowers. South Asia is also the region that saw the gap in account access between men and women decrease the most, from 18% in 2014 to 11% in 2017, at the same time that overall account access went up to 70%. The women-focused outreach of the surveyed MFIs clearly contributes to that improved access.
At the other end of the spectrum, MFIs in Eastern Europe and Central Asia serve a majority of male clients: only 45% of their borrowers are women. The gender gap has increased from 3% to 6% despite overall growth in access of 7 percentage points.

Rural clients, including smallholder farmers, also constitute an important excluded segment served by MFIs. Many regions have a strong focus on rural outreach, including Africa, East Asia and the Pacific, and South Asia, which have two-thirds or more of their clients in rural areas. In contrast, MFIs in Latin America remain strong urban actors, with just a third of their borrowers in rural areas. Within the region, only countries in Central America stand out for having 50% or more of their borrowers in rural areas.

Focus on the profitability of microfinance institutions

Profitability of microfinance by region
Underpinning the growth in services are the business models and operating environments that shape institutional performance. As stressed out in the overall growth in 2017, MFIs faced increasingly challenging environments over the last couple of years, leading to slower growth in outreach. Reflecting this difficult context, the global portfolio at risk (PAR) exceeding 30 days increased, going from 4.7% in 2015 to 7.2% in 2016.

The contraction in loan portfolio recorded in Eastern Europe and Central Asia also appeared in business performance. On average, these MFIs generated losses (-1.1% return on assets) as delays in repayments increased by 50% compared to the prior year (15.7% PAR > 30 days). Azerbaijan and Tajikistan were particularly struck with portfolio quality problems and MFIs in both countries registered negative returns on assets, at -8.8% and -1.0% respectively.

African MFIs earned overall positive returns (3.1% return on assets) with low portfolio quality (14.5% at 30 days). The positive returns were achieved, in part, from a large deposit base generating a low overall financial expense ratio (3.6%) and a portfolio earning the highest yield of any region at 26.6%.

South Asian MFIs’ performance is buoyed by strong productivity and efficiency generated from a business mode which relies on group-based methodologies, allowing MFI staff to serve several clients in one setting. These MFIs spent an average 25 dollars per borrower, one-third of the operating cost of the second most efficient region and one-tenth of the most costly one. This low operating cost allowed them to clear the highest average profits (3.5% return on assets) while managing an average yield (21.2%). In addition, MFIs from the region registered the highest financial expense ratios (6.4%), resulting mainly from their dependence on external borrowers (40% of their total funding). For Indian MFIs, profits remained at regional norms despite the strong uptick in repayment delays (up to 14.5% by March 2017) from borrowers impacted by the withdrawal of large quantities of cash during demonetisation. Despite these challenges, Indian MFIs managed to earn 2.6% return on assets for the year ended March 2017, down slightly from the prior year.

Latin America and the Caribbean, the largest region by loan portfolio base, also witnessed the most stable institutional performance. Some markets, like Mexico, experienced a small rise in portfolio risk (up to 9.4% by end 2016), due in part to its extensive exposure to consumer lending (>20%), and connected to the small contraction by MFIs from their lending portfolios in 2017. In other countries, like Bolivia, Colombia and Peru, the stable environment allowed MFIs to maintain similar portfolio risk, operating efficiency and returns as in the prior year.

Looking ahead
After a challenging year in 2017, MFIs in many markets are revisiting their projections for growth. In countries where borrowers outreach shrank in 2017, such as Kenya and Cambodia, MFIs that once projected optimistic growth in 2017 foresee little or no growth in 2018. Behind these projections are expectations for tougher business environment in 2018. MFIs cite both competition from other MFIs and new entrants and a more difficult macroeconomic environment as primary factors limiting their growth this year, and early data from March 2018 indicate that these projections are more realistic than in 2017.